Since it’s peak of popularity in the 70’s and 80’s, dart leagues in Maryland have been carrying on a darting tradition that dates back to pubs throughout England in the late 1800’s, and was brought home to America by troops returning to the states after World War II.

The Maryland Dart League Championship is a unique event that draws the best players from each dart league in the state of Maryland for a full day of high stakes competition. The top two teams receive a 100 percent payout of the entry fee, plus $500 added by Triple Nines Bar and Billiards.

Each team will bring their 5 best male players, and 3 best female players, and face off in a “Round Robin” format consisting of 4 Singles matches, 3 Doubles matches, and 2 Mixed Triples matches. All matches will be played “Chicago Style”, meaning 1 game of 501, 1 Game of Cricket, and 1 Cork Call game if needed.

HCDA is a not-for-profit social dart organization whose main objective is to coordinate dart functions and activities in Howard County Maryland and the surrounding area while promoting the sport to those who are interested in playing. HCDA welcomes anyone with an interest in learning or playing darts. 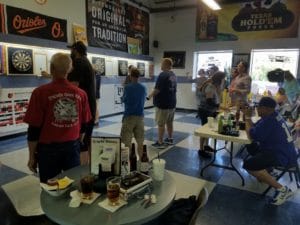 “Luck of the Draw” at Triple Nines in Elkridge, MD, every Saturday, starting at 6p. The Luck is a great way to get introduced to players throughout the area and learn the game.